Winter in Doha is beautiful. The temperatures are dropping to acceptable levels and the nature is rejoicing. If there is one thing I would have to pick as most favorite during winter it would have to be the sky. And yesterday was a great example. I could not resist the temptation so I stopped the car (yeah…I should have been riding) and snapped a photo with my mobile phone. Painting like…

If you have a motorcycle then the chances are that you want to show off  to your friends with cool, action like, videos of you and your motorcycle. Let those fu…ers that use to bully you in primary school see what a macho you have become and most importantly show your ex that you are cool, you can ride! Not like that idiot she’s now going out with…..Anyway…I got distracted. So. Action cameras. The most popular action camera out there is of course GoPro. I own one and I am relatively happy with it. I am saying relatively because, in my humble opinion (aka eejit who doesnt have a clue), the battery on the GoPro sucks big time. I have a GoPro Hero+ and, without having the remote control or the viewfinder on and with the WiFi switched off, the battery on that thing would not last longer than 40-45min. So many shots missed because of the battery. Aggrr…But hey. I have recently found a new action camera. TomTom Bandit. For those living in UK, remember TomTom? The GPS navigation device that could not find any address and would get you lost in no time?! I kid you not. I used one on a trip through Europe and ended up in Ukraine. But hey. That was like a century ago. A lot change since.  TomTom has recently came up on the market with an action cam and you know what? They did an amazing job!!

The camera is well built, it comes with loads of accessories but most importantly, the battery last forever.

That is WOW. The image quality is not as good as the GoPro but the difference is negligible in my opinion. It comes with a built in GPS that gives you the ability to record your speed, locations and g-force. Now you can show your friends what a man you are and how you reached 30km/h…WOW! 🙂

I’ve posted a quick video sample below. Once again, I am very pleased with it and I highly recommend this camera to anyone looking to purchase an action camera.

Riding in Doha during peak hours can be extremely challenging. Unfortunately, most drivers in Doha posses driving licenses obtained from cereal boxes, raffles at local events or Happy Meals at McDonald. Bottom line, most drivers here are one step away from amoebas, with a negative IQ that will make a ceramic garden dwarf the most intelligent member in their family. All this makes riding very challenging and of course, dangerous. My head is spinning like a yo-yo when I am riding and I am constantly scanning the traffic for potential dangers. I know I am going to sound racist but I when I am driving or riding, the first thing I check when I approach a car is…(again, I know for those not living in middle east this will sound extremely racist), the ethnic background of the driver. I have learned, after 4 car crashes, that certain ethnic backgrounds are to be avoided at all cost. When I see a driver  I assume is from certain geographic areas that have been proven to produce (I will have to stay polite here) people that cannot drive nor that can comprehend what a civilized driving etiquette is (phew..that was hard), I either stay the hell away, I keep looking at their eyes to try guess  the next move from the blank look on their face or flash and beep the horn in advance to wake them up and signal my presence.

The other day I was riding home from work, happily enjoying the purr of my Guzzi,  when I had an encounter with a driver that had simply tried to squeeze his BMW SUV in between me (or over me had I not seen him) and a concrete parapet. Luckily, because of the wind noise (I am yet to purchase a microphone with a decent dead cat for my GoPro) I am not recording the voice, otherwise you would have been exposed to an explosion of colorful language…

I have recently purchased an LG 360 camera and, while I am still trying to figure out how to upload 360 degree videos, I have found a way of doing … END_OF_DOCUMENT_TOKEN_TO_BE_REPLACED

It is Friday and Friday means one thing in Doha. No traffic and no traffic means…braap! Perfect conditions for riding. The weather had improved substantially and the temperatures are now around 28° to 30°C. A pleasure to ride.

Early morning ride. The road is all mine and of course, a great opportunity for a glam photo session 🙂 Hope you like it.

Few photos from a ride to a nearby racing facility – Lusail.

At the beginning of the year, when I was searching for a motorcycle, one of the constant feedback and advise I was getting was “Oh man (you add the goofy accent). Don’t get a cruiser. Cruisers can’t lean and corner”. Well, after riding my Guzzi for a month all I can now say is…bull$%it!!. 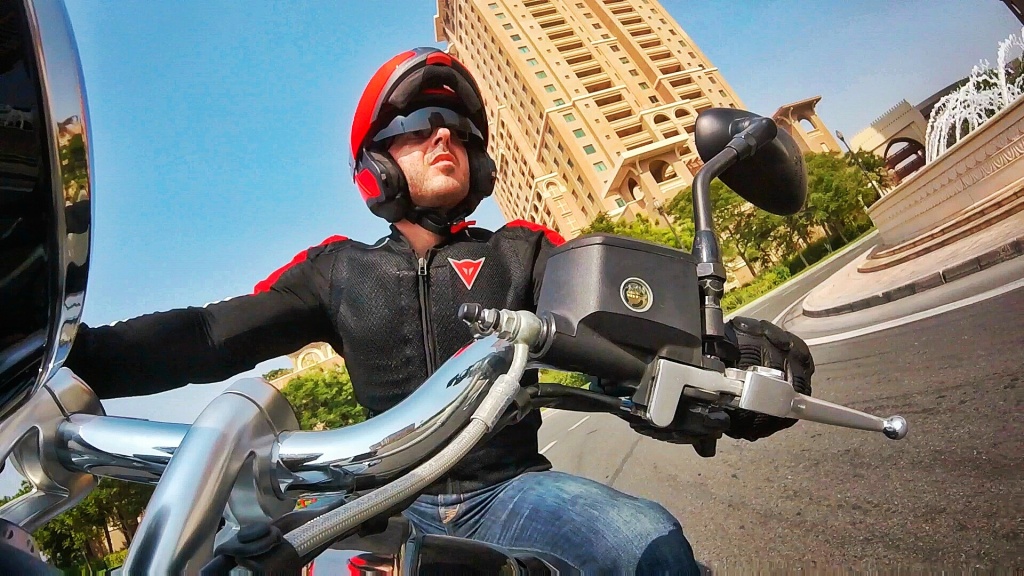 The weather had finally started to improve…which in middle eastern terms means that the temperature had dropped from +50C to a more manageable +35C :). Yeah…that is cold! 🙂 So the cold temperatures (sarcasm), gave me the chance to take the bike out for riding more often. How does it feel to ride?! Awesome! Pure therapy! Having an amazing good time!!

Riding in hot weather is an important topic for me. The weather here (in Qatar) oscillates between hell and hot lava 🙂

So much road, so little ability

Wordpress blog in which I say and write what occurs to me at any time.

"That rumbling sound you hear when a group of bikes come together is not noise, it is the harmony of brotherhood and sisterhood coming together for purpose and cause." - Unkown.

Tales from a motorcycle tour of Britain

Motorcycles and the Cynic

My motorcycle adventures and thoughts

An Iowa mom and professional with opinions.

A daily selection of the best content published on WordPress, collected for you by humans who love to read.